After six decades, the Chanticleer Community Theaters is happy to be a part of the brand new Hoff Family Arts & Culture Center.  This valued community theater has shared its love and passion for music and the arts on stage since 1952.  Chanticleer Community Theater performs a wide repertoire of plays and programs to delight and entertain live theater lovers young and old.  The mission of Chanticleer is to provide an educational, entertaining, cultural, and historic experience for the greater Council Bluffs and Metro community through the performing arts.  Come and join us for shows filled with love, laughter, and fun!

The long-awaited sequel to the popular The 1940's Radio Hour. It's Christmas Eve, 1943, and the Feddington Players are now broadcasting from a hole-in-the-wall studio in Newark, NJ, and set to present their contemporary "take" on Dickens's A Christmas Carol. Whether it's the noisy plumbing, missed cues, electrical blackouts, or the over-the-top theatrics of veteran actor, but radio novice, William St. Claire, this radio show is an entertaining excursion into the mayhem and madness of a live radio show. St. Claire's escalating foibles and acting missteps propel the show to a simultaneously comedic and heart-wrenching dramatic climax: St. Claire has an on-air breakdown, and begins to connect his own life with that of the classic Dickens tale. In order to "save the show," the company improvises an ending to Charles Dickens' classic as a film noir mystery, featuring a hardboiled detective, a femme fatale, and an absurd rescue of Tiny Tim (and the Lindbergh baby) from the clutches of a Hitler-esque villain named Rudolf!

When Harold Hill, a traveling con man, arrives in River City, he convinces the locals to start a band by purchasing the uniforms and instruments from him. His intention is to flee as soon as he receives the money. Librarian Marian Paroo suspects Harold is a fraud, but holds her tongue since her moody brother, Winthrop, is excited about the band. As Harold begins to develop feelings for Marian, he faces a difficult decision about skipping town. 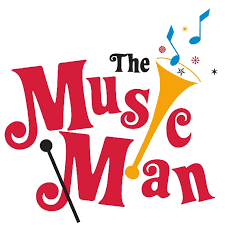